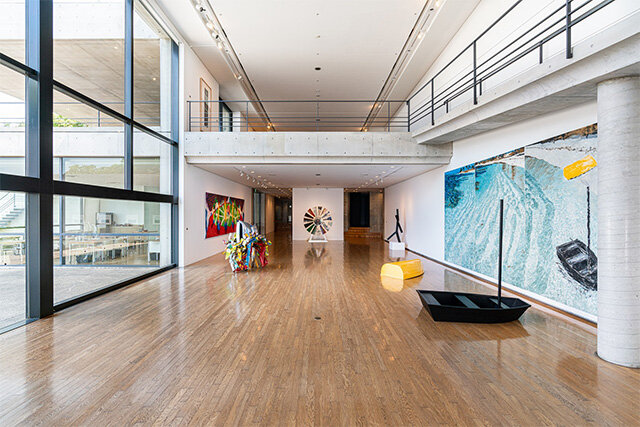 Benesse House Museum opened in 1992 as a facility integrating a museum with a hotel, based on the concept of "coexistence of nature, art and architecture." Designed by Tadao Ando, the facility is built on high ground overlooking the Seto Inland Sea and features large apertures that serve to open up the interior to the splendid natural surroundings. In addition to exhibiting the painting, sculpture, photography, and installations in its collection, the Museum also contains permanent site-specific installations that artists have created especially for the building, selecting locations on their own and designing the works for those spaces. The Museum's artworks are found not just within its galleries, but in all parts of the building, as well as in scattered locations along the seashore that borders the complex and in the nearby forest. Benesse House Museum is truly a rare site where nature, art, and architecture come together, in an environment containing numerous site-specific works created for the natural environs of Naoshima or inspired by the architectural spaces they inhabit.

Admission：
JPY 1,300
* Free admission for children of 15 and under and overnight guests at Benesse House.

Tickets：
Available for sale on the spot

Valley Gallery is composed of a small building resembling a shrine and the surrounding outdoor area. Built along the valley, which is considered a boundary or sanctuary, the double-walled interior space is introspective, it is open to the semi-outdoors, allowing visitors to directly feel the movement of natural energy, such as light and wind. The architecture and these works, which reflect the surrounding nature and local history, will resonate with each other and promote a renewed awareness of the richness of nature, symbiosis, and the fundamental spirit of prayer and rebirth.

These works are on display on the 2nd floor of Benesse House Museum.

These works are on display on the 1st floor of Benesse House Museum.

These works are on display on the basement floor of Benesse House Museum.

The "Cultural Melting Bath" was built on the coast of Naoshima with the strongest flow of energy, based on the philosophy of Feng Shui.

Tadao Ando-designed gallery, located in a terraced plaza on the south side of Benesse House Museum, looks out over the ocean. The space is long and narrow in a north-south direction along the topography, and light pours into the interior through a large opening facing the east.

These works are on display surrounding areas of Benesse House.

This restaurant is located on the ground floor of Benesse House Museum. The large windows allow you to appreciate the view of the Inland Sea and modern art from any seat while you enjoy a meal in this extraordinary space. In addition to a dinner menu focusing on kaiseki cuisine made with fresh Setouchi seafood, breakfast and lunch featuring a wide variety of seasonal ingredients are also available.

This cafe is on the second floor of Benesse House Museum. Natural light pours into the interior through large windows facing to the south and west, allowing you to enjoy a leisurely light meal or beverage while gazing out at the Inland Sea below. There is also a shop which has a selection of books on Benesse House Museum, as well as a selection of art goods that make perfect souvenirs.

This shop is on the second floor of Benesse House Museum. In addition to books on Benesse House Museum and Benesse Art Site Naoshima, a selection of art goods that are perfect for souvenirs is available as well. There is also a café where you can enjoy a light meal or beverage while taking in the view of the Inland Sea below.

The library on the second floor of Benesse House Museum is a space flooded with the sunlight of Setouchi through the large windows that are a distinctive feature of the architecture. You are free to view drawings by Tadao Ando made during the designing of Benesse House Museum and the Chichu Art Museum, as well as books relating to the artists in our collection. Please also feel free to use it as a place to rest in between enjoying the art.

In order to ensure a smooth admission, groups of 9 or more visitors who intend to visit Benesse House Museum are advised to contact us in advance using the Benesse Art Site Naoshima Group Advance Notice Form.

Contact us :
In order to ensure a smooth admission, groups of 9 or more visitors who intend to visit Benesse House Museum are advised to contact us in advance using the "Benesse Art Site Naoshima Group Advance Notice Form."

Also, please note that visitors are not allowed to enter the Benesse House Area in a chartered bus without advance notice.

(1)Accessibility
Due to characteristics of facility, some places are not accessible for visitors with disabilities and special needs.
We ask for your understanding.
We will support you as much as possible when you visit us, so please contact and discuss directly with our facilities.

(2)About lending wheelchairs, etc.
・Wheelchairs: We have 2 wheelchairs available on a first-come, first-served basis.
・Writing tools: Available.
・Multi-purpose toilets: Available.
・You may enter our facilities with a service dog, a seeing eye dog, and/or a hearing assistance dog.

When visiting the museum

When viewing the artworks

・Please do not touch the walls, the glass, or the artworks themselves.
・Please do not take photographs, videos, or make sketches in the museum. Visitors are also requested not to use fountain pens, ink, etc.

・It's strictly prohibited to operate Unmanned Aircrafts (UAs) /Drone in Benesse Art Site Naoshima premises without our prior permission due to safety assurance reasons for the people, architecture and artworks.