Having left the Uwajima shipyard, the barge carrying the hull-form stopped at the ports of Misaki and Imabari in Ehime Prefecture and Takamatsu in Kagawa Prefecture, and was unloaded onto dry land at Ieura Port, Teshima on Tuesday, December 8.

It was transported overland on Friday, December 11. Guided and watched over by island residents, the hull-form was carried toward the village of Ieura-oka, where the former sewing needle factory is located. It almost looked like a bridal procession was underway.
While the rain that had been falling until just before dawn had stopped, a strong wind was still belting the port at nine AM. Before the transport began, a seaside Shinto ceremony was held, and Mr. Mori, chief priest of Tonosho-Hachiman Shrine on Shodoshima Island, recited a prayer: 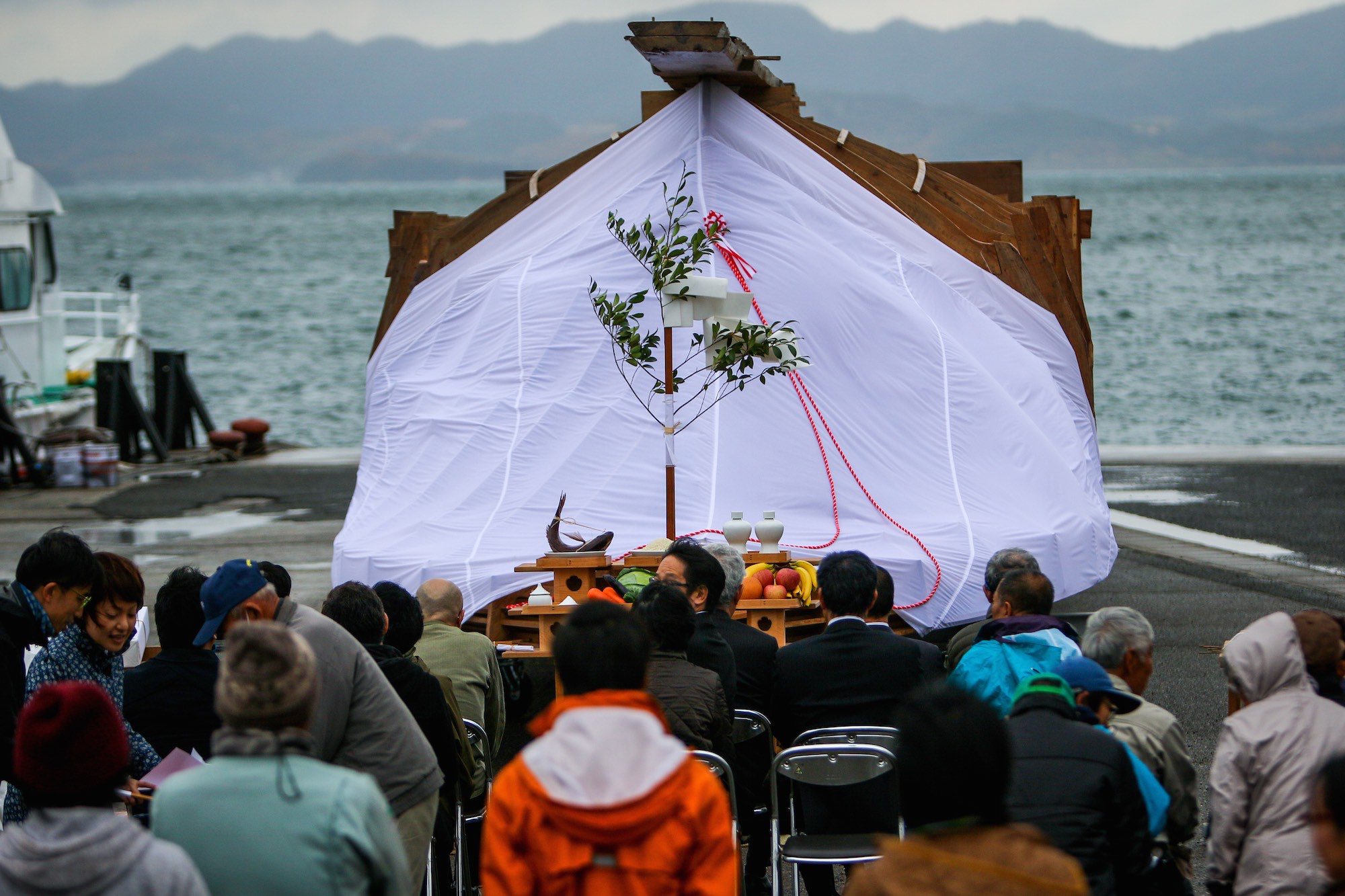 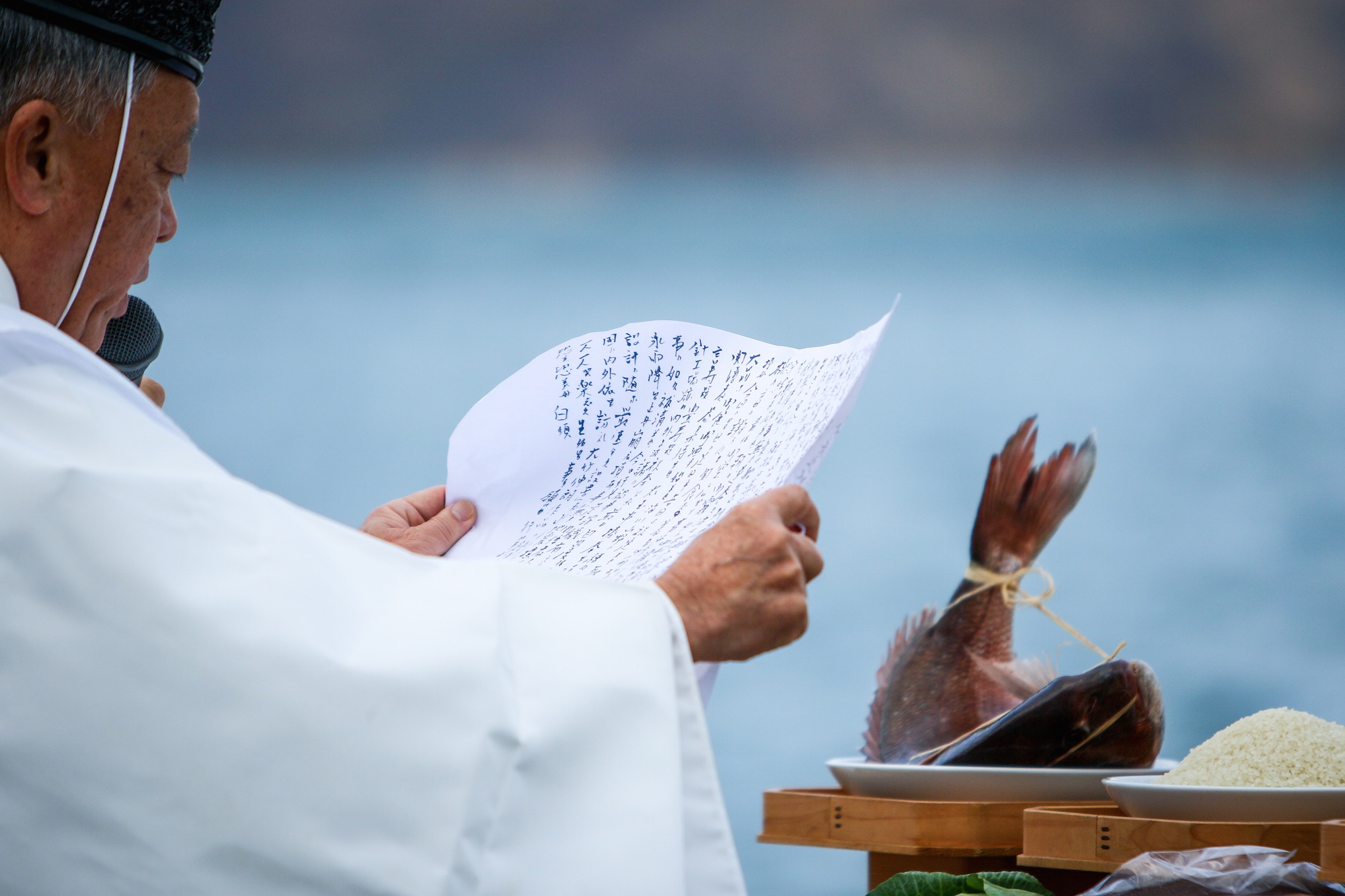 "May this become a work of art for a new age, viewed by many people from throughout Japan and around the world, and may the thoughts and ideas invested in this work by Shinro Ohtake bring a new kind of joy and tranquility to those who view it. May this work always be blessed and be a source of happiness in the lives of its viewers."

After the prayer, Mr. Miyake, head of the Teshima federation of neighborhood associations, made a speech asking everyone to join in and make next year's Triennale a great and transformative one for Teshima. The port of Ieura then resounded with the sound of Ise-Ondo music performed by Hiroshi Kadoishi, and spirits rose as preparations for transport continued.

There were a total of 70 people, including Teshima residents who had come out in the cold for the event as well as Benesse Art Site Naoshima staff. Among the participants were children attending junior high, elementary, and nursery schools on Teshima. After the prayer, people took hold of giant ropes tied to the hull-form, and a procession began from Ieura Port to Ieura-oka about 800 meters away. 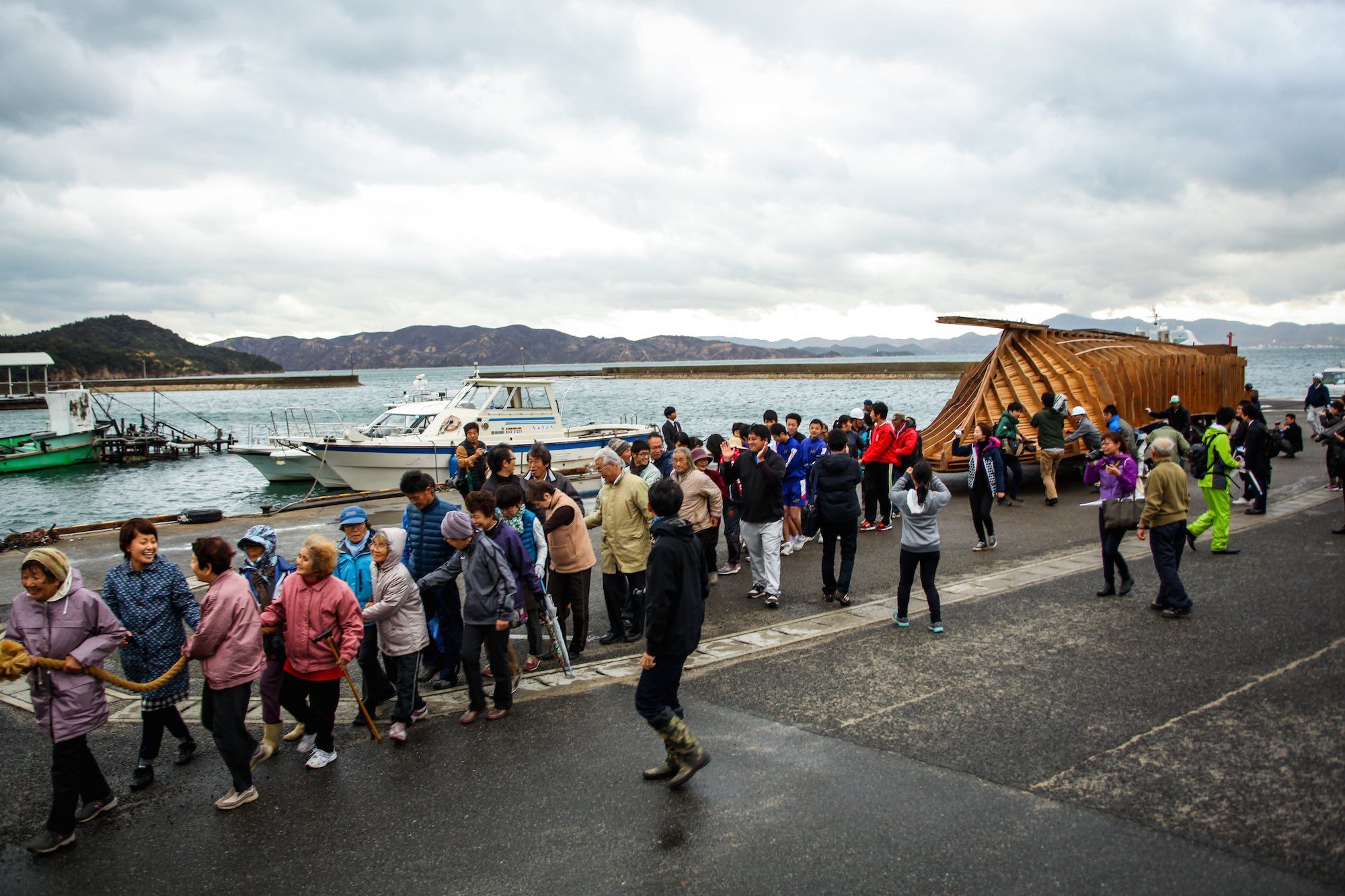 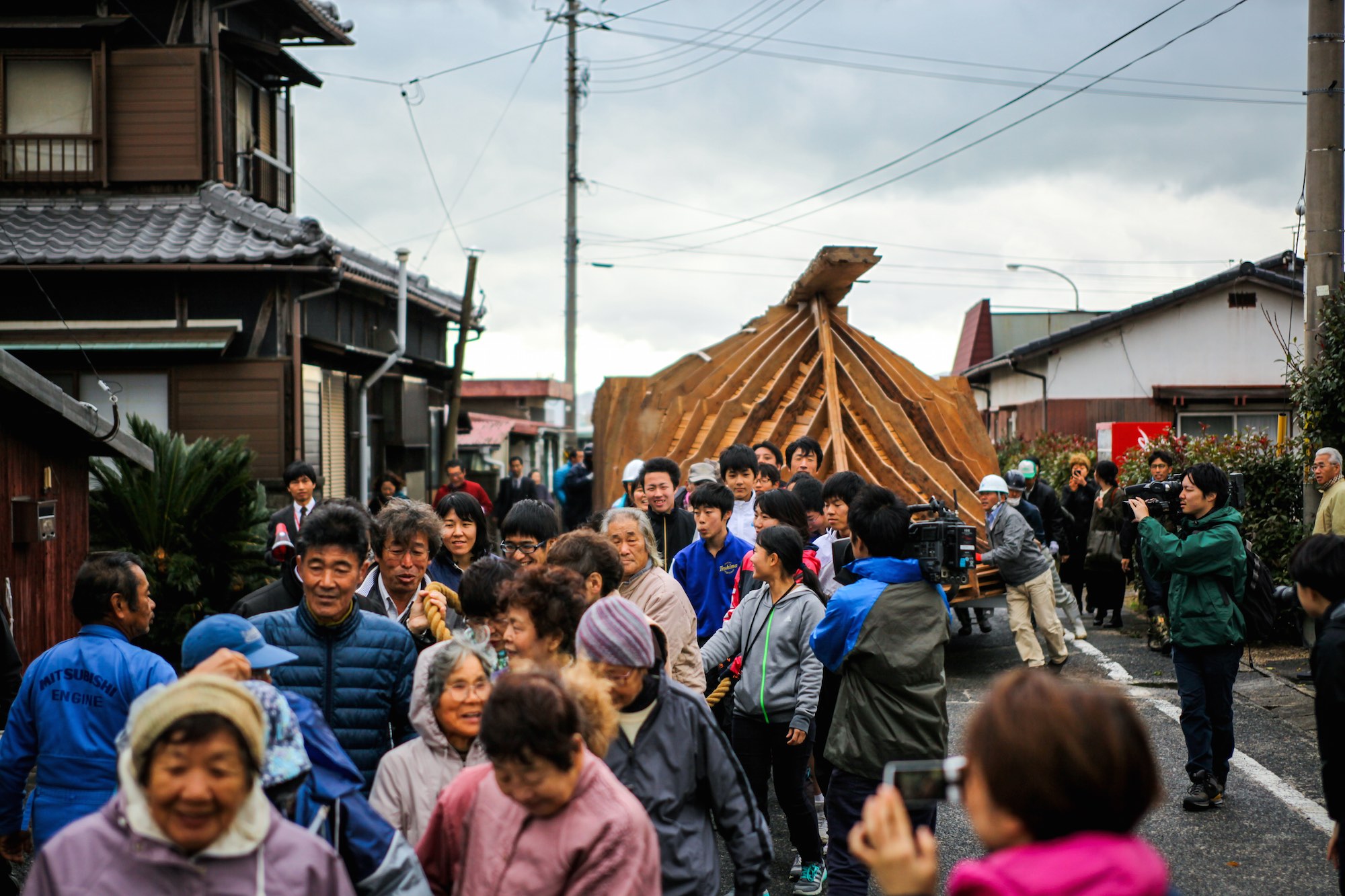 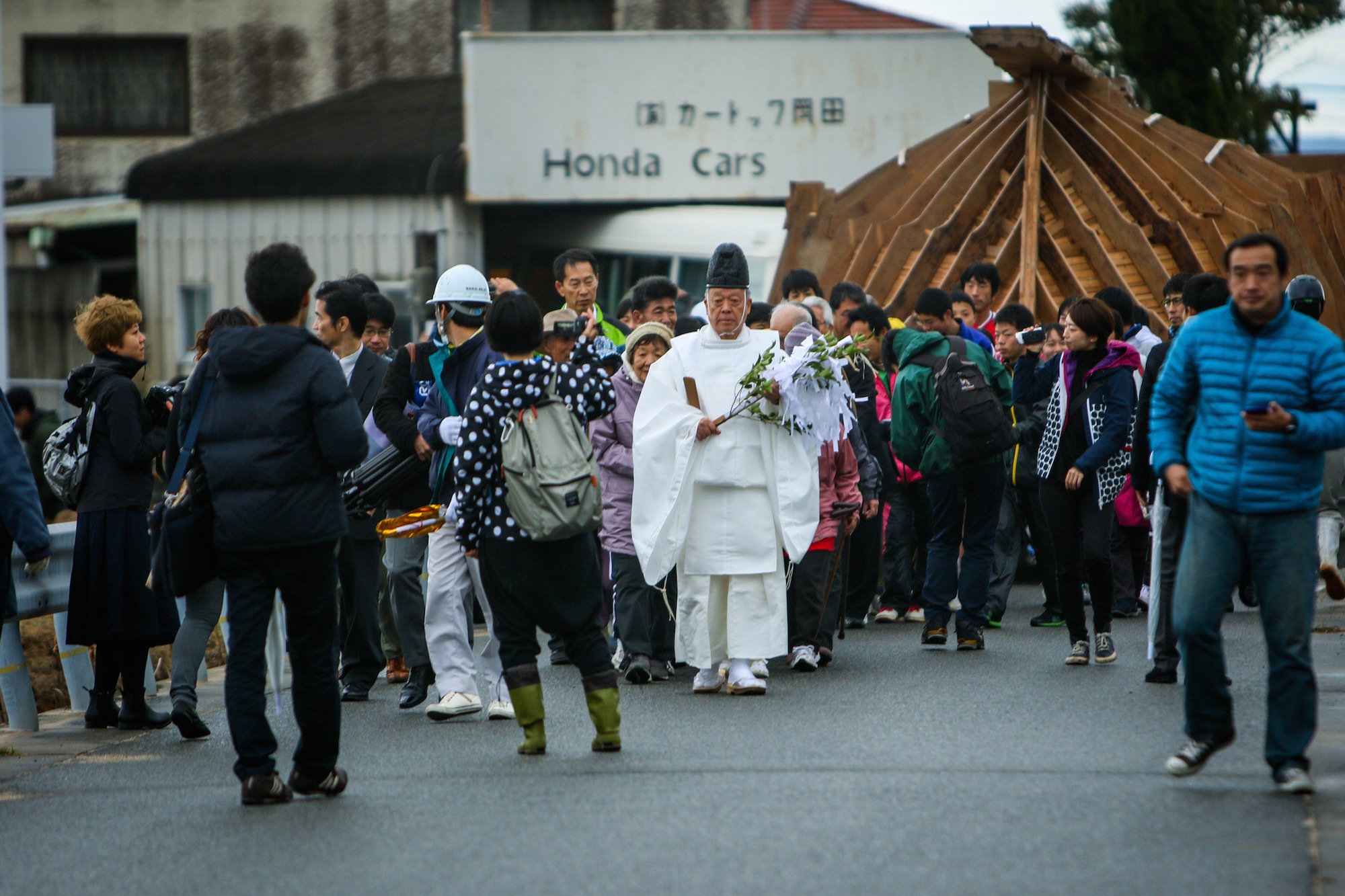 Chief Priest Mori led the procession, and the hull-form was led along by island residents, surrounded by a crowd of people and barely fitting down the narrow streets. 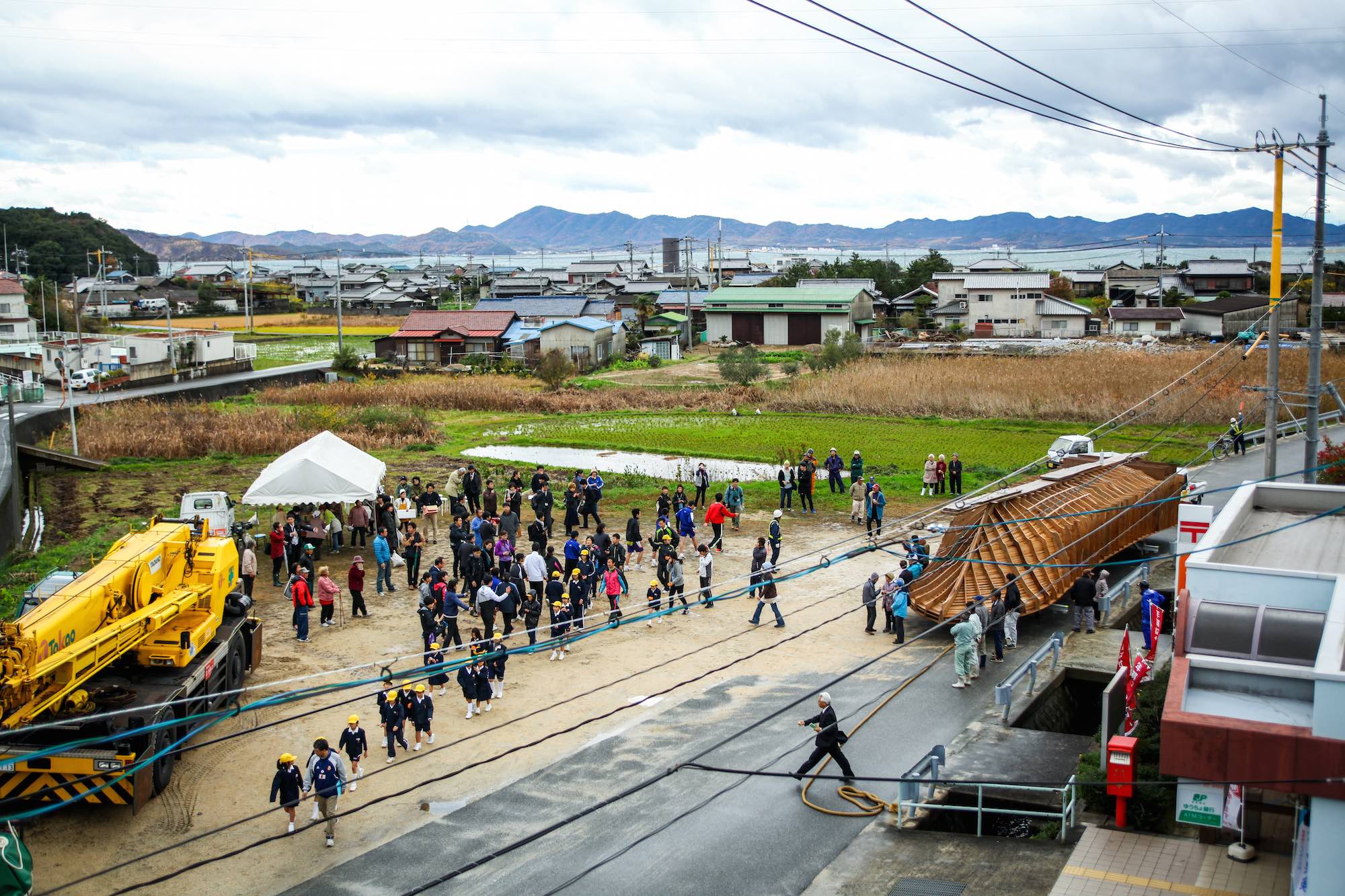 Along the way there was a rest stop where participants were served gojiru soup and Teshima mandarins. Gojiru, made by mashing soybeans into paste and soaking them in miso, is a traditional homemade dish eaten all over Japan in autumn, when soybeans are harvested, and winter. Residents of Ieura-oka, where the hull-form was to be installed, had begun preparing it the night before. 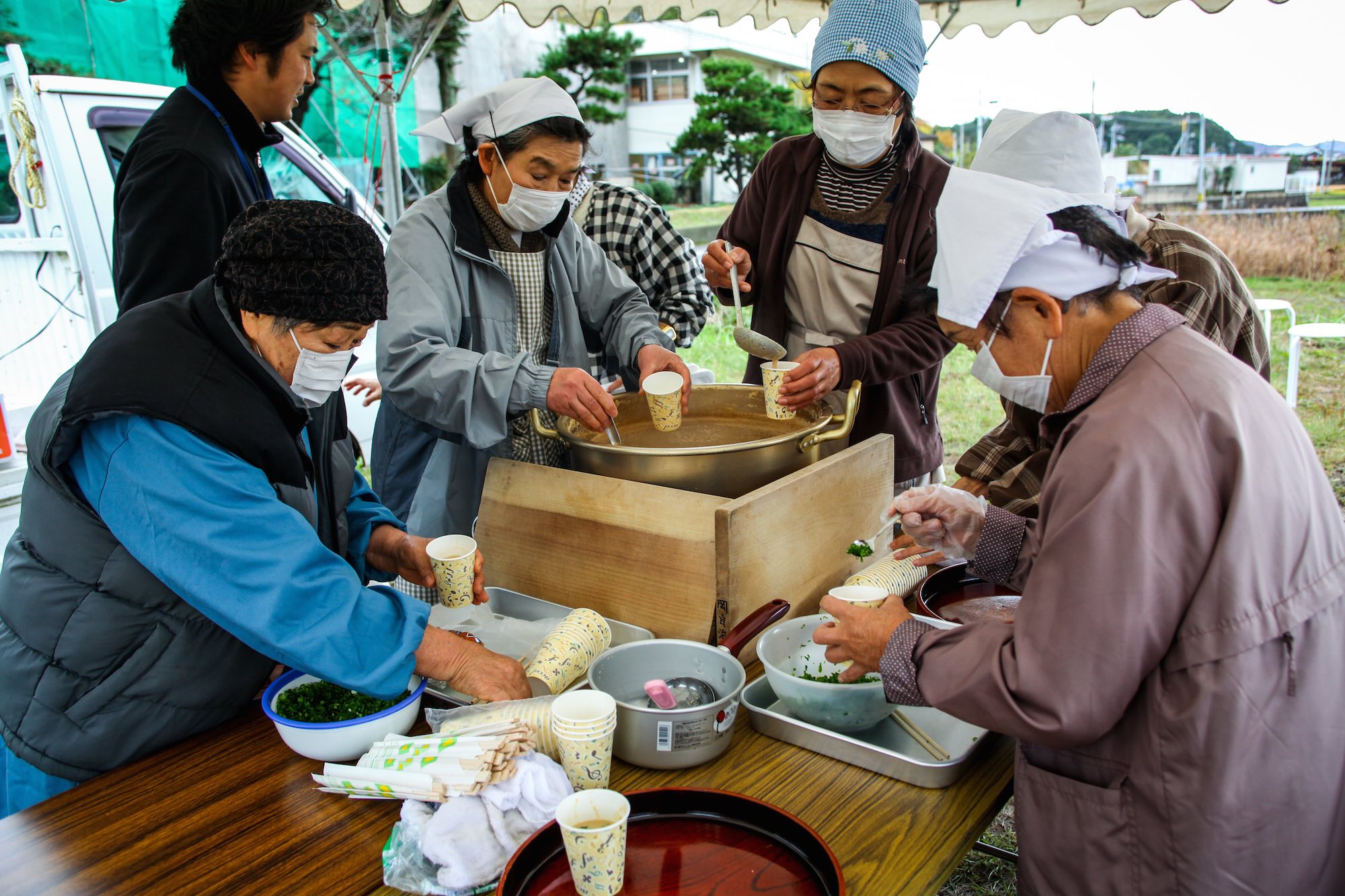 After the break, it was time to ascend the final hill. While transporting the hull-form, some of the local residents noted that it was just like a festival. If this was true, in terms of everyone working together to move some large object (like a portable shrine in the case of many festivals) together, and the subjective experiences of each individual participant being entered into the collective regional memory, it was certainly a tremendous gift for this work of art.

Hauled by a large group of people, the hull-form completed its ascent of the slope and reached the disused sewing needle factory. It was moved slowly into the interior under the eyes of all present. 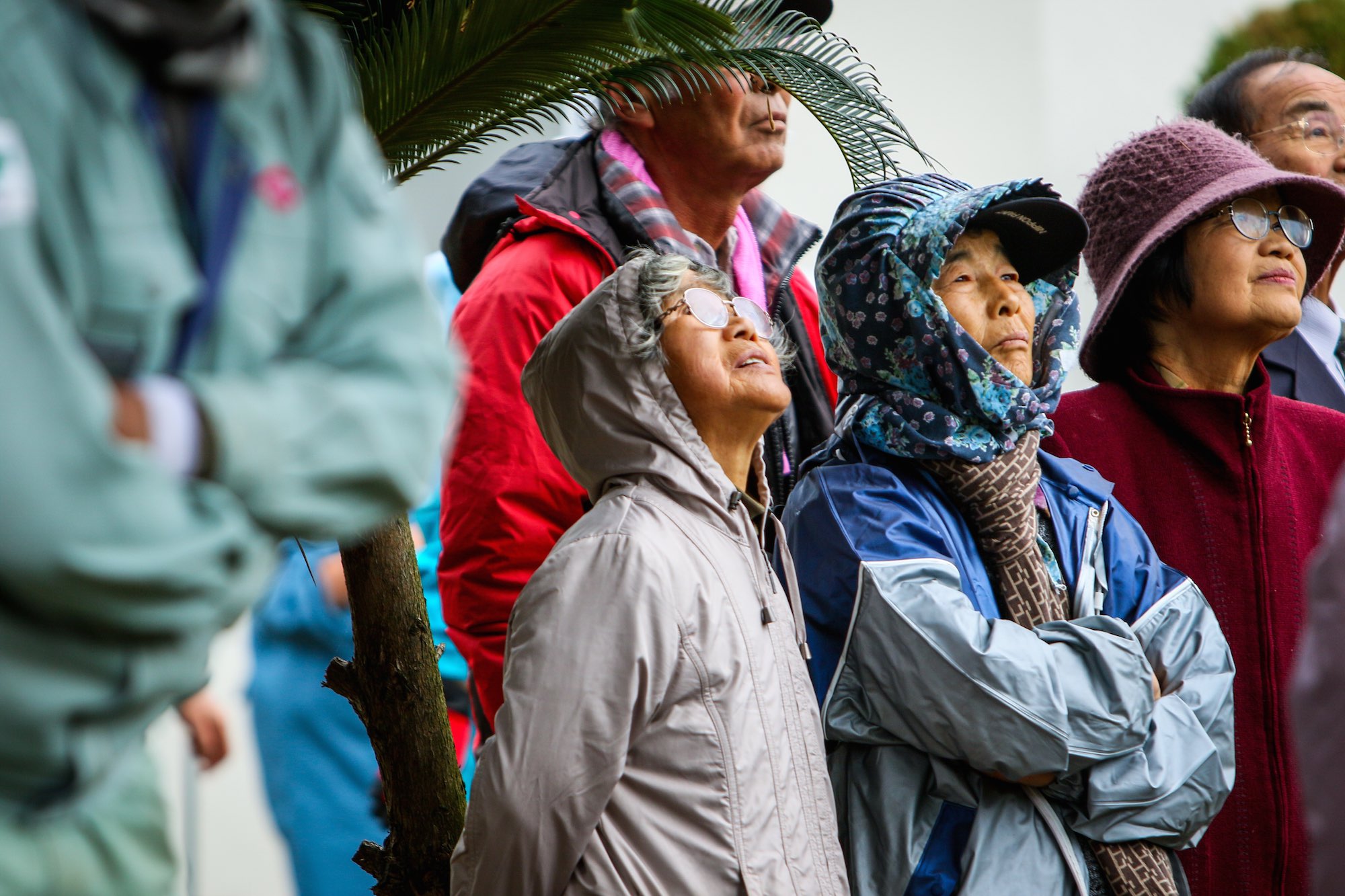 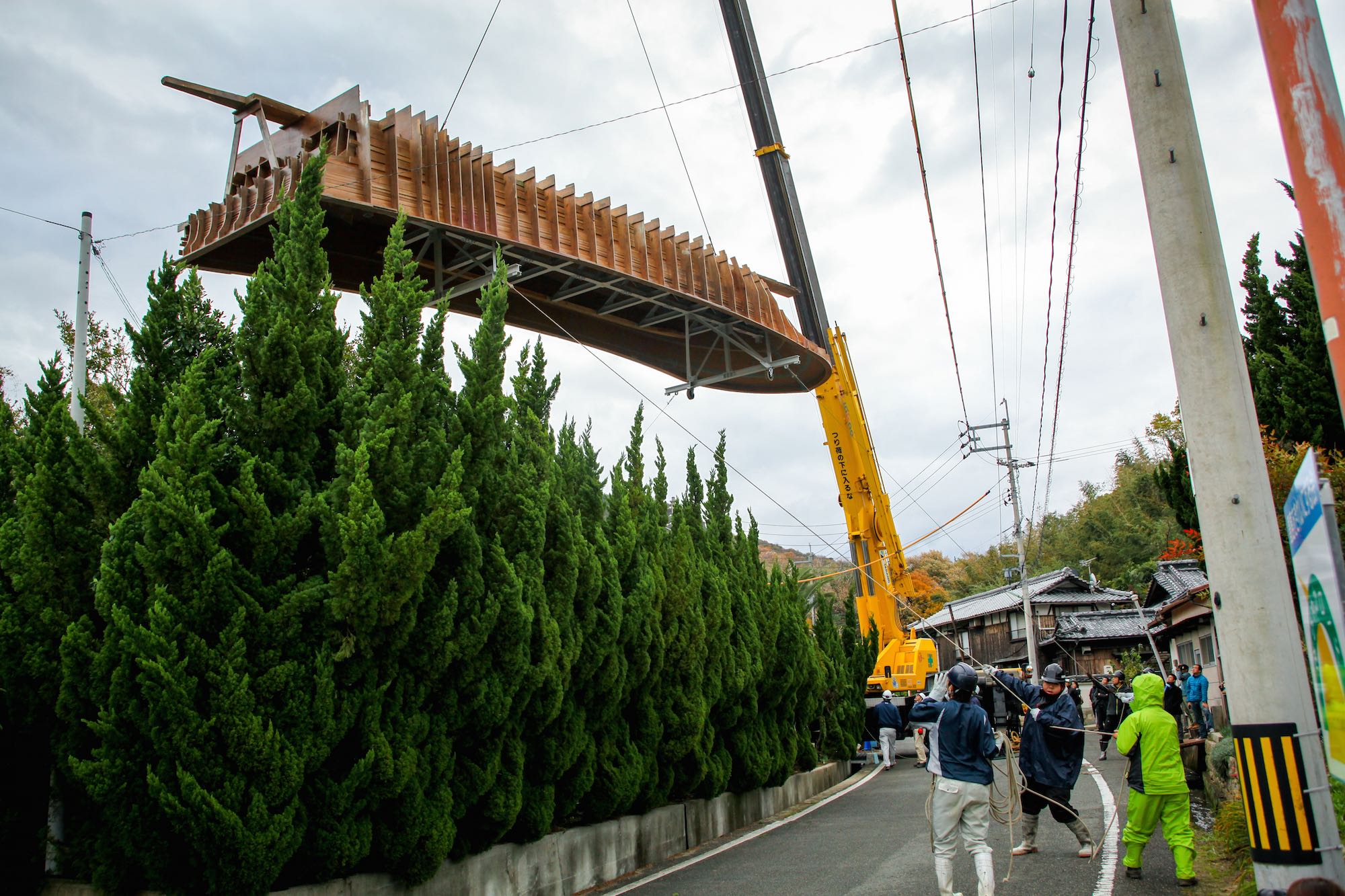 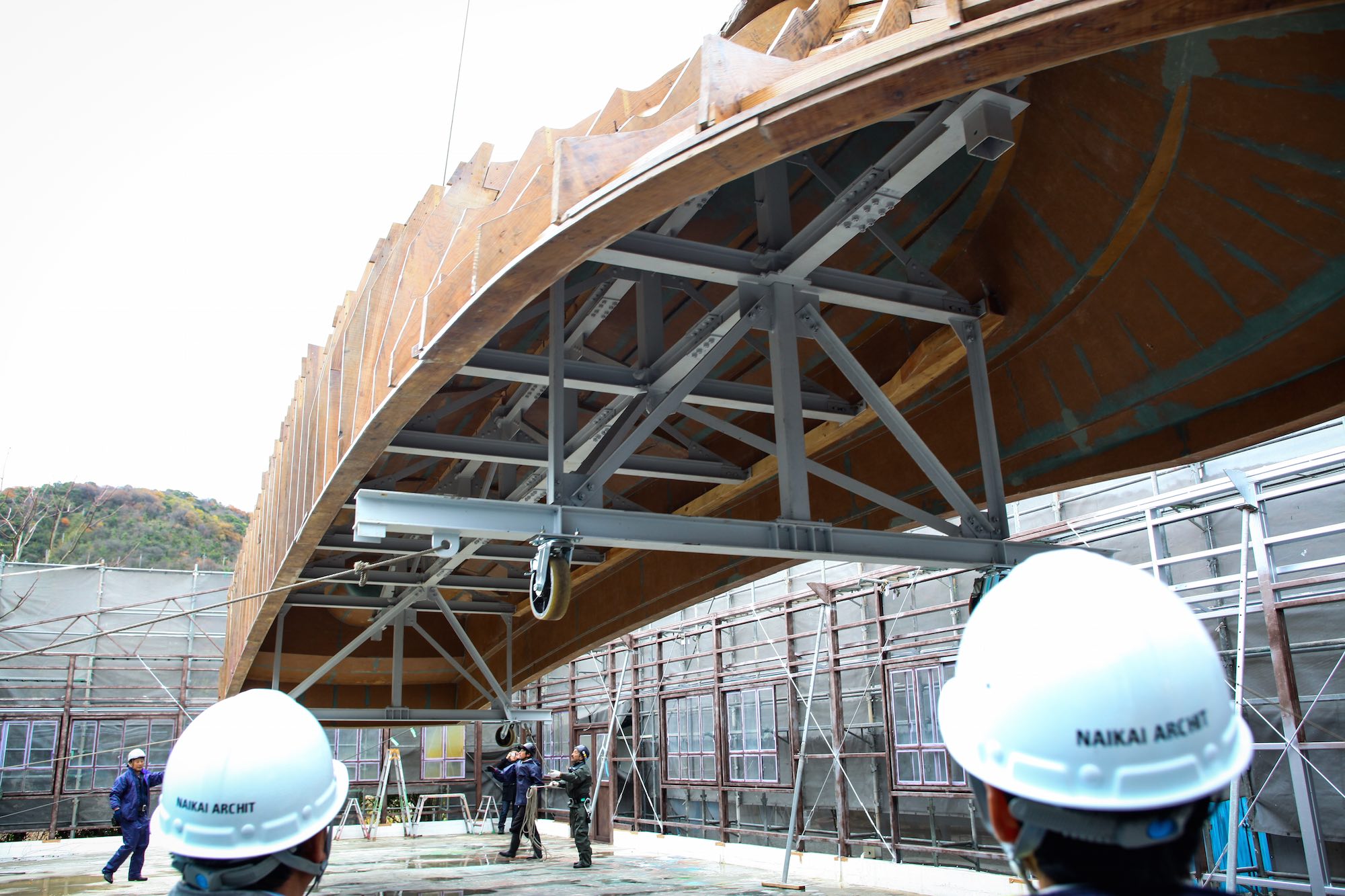 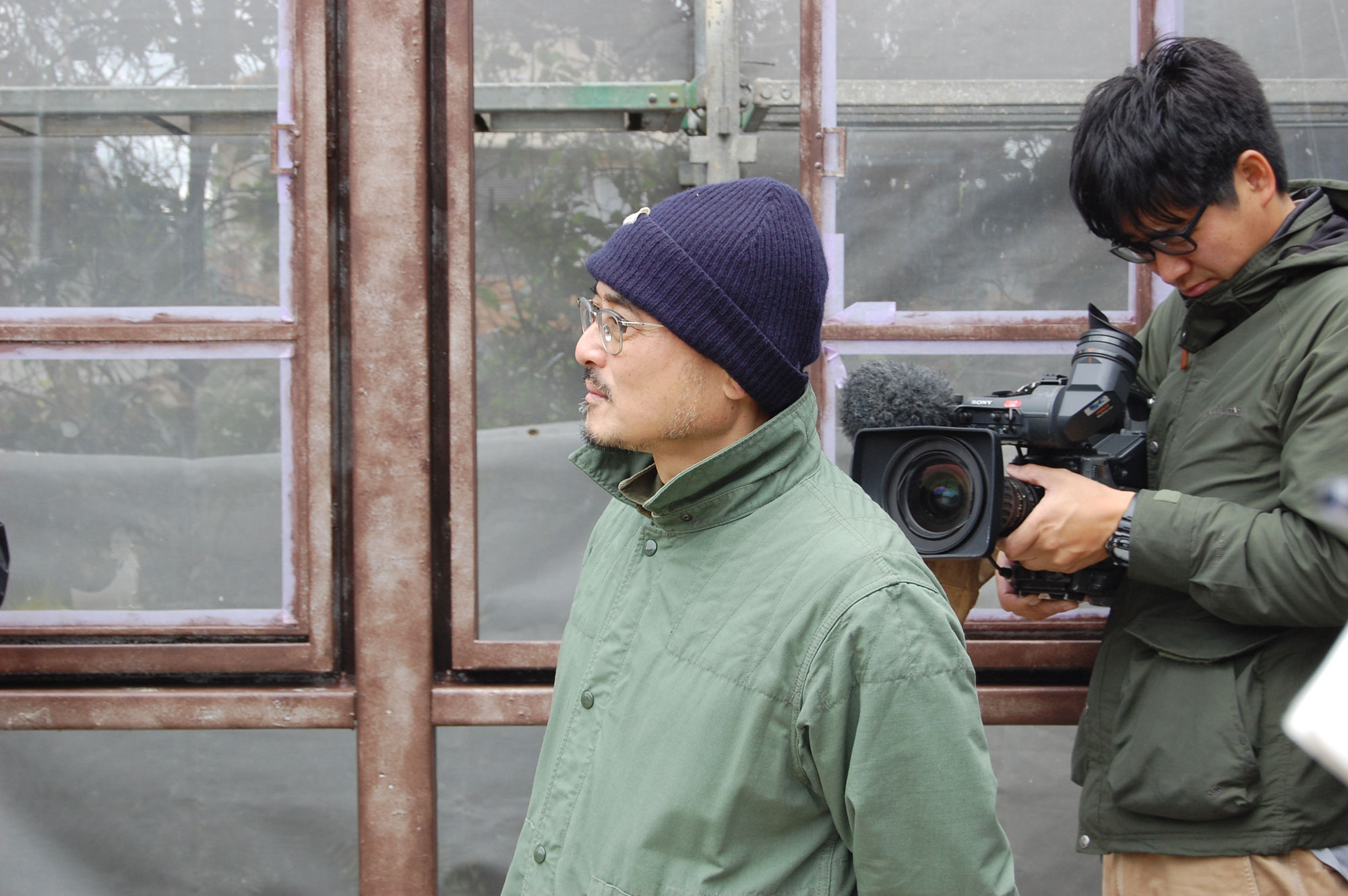 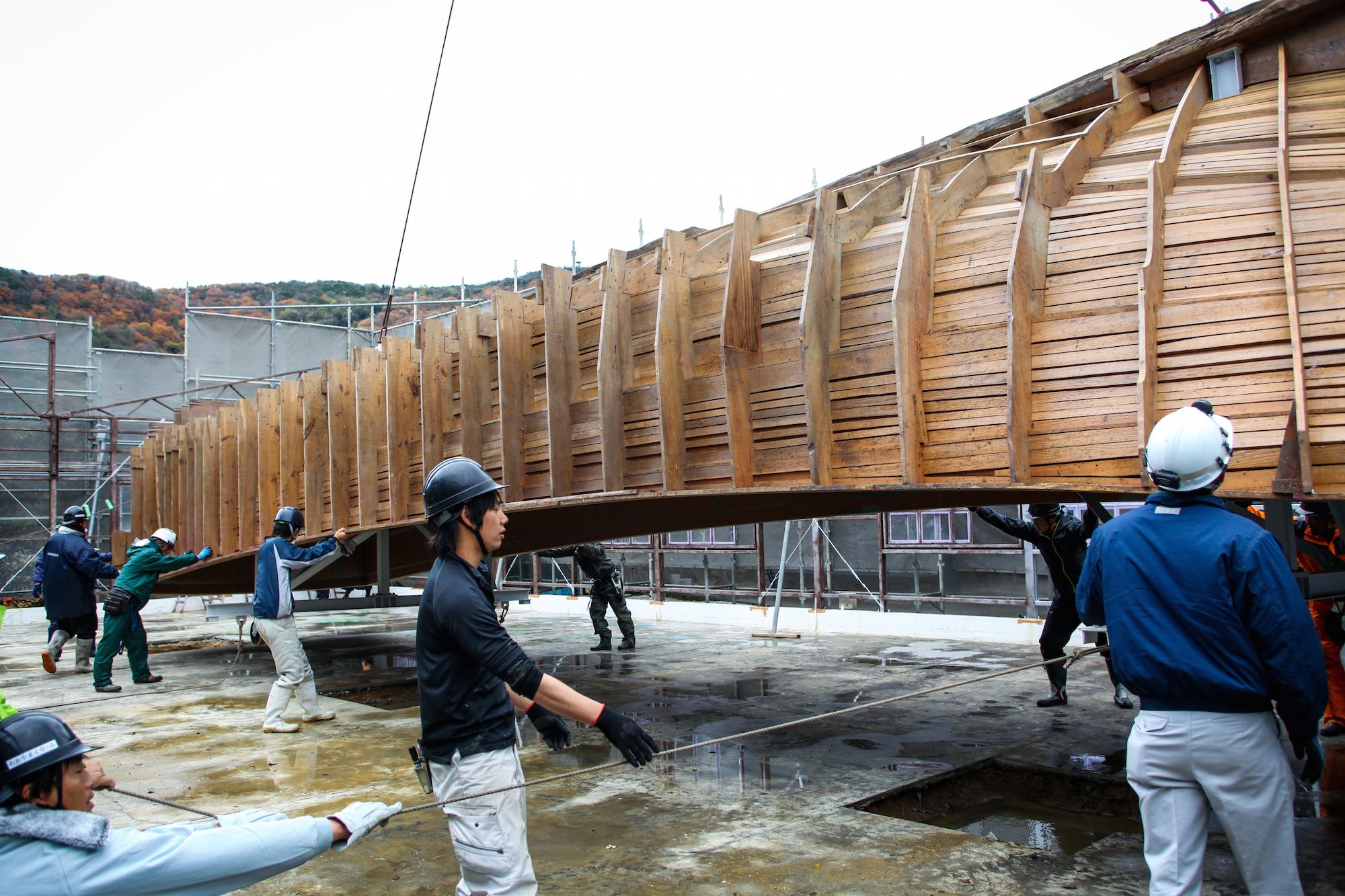 The fact that the hull-form had never actually played its intended role in shipbuilding seemed to make it all the more important that it be transported intact, without dividing it up in pieces or causing it damage of any kind. This made of the instant when it entered the building that would house it, unharmed, a momentous one. Having the residents of Teshima welcome it, lead it to the site, and watch over it made the occasion truly one to celebrate. The artist Shinro Ohtake no doubt feels this way. Thanks to the cooperation of so many people, the hull-form arrived at its new "home port," the defunct sewing needle factory building.

At the same time, the work was not yet over. The task of combining the hull-form and the old needle factory into a seamless space that constituted a single work of art remained. Ohtake Shinro's work continues in preparation for the opening of the Setouchi Triennale on March 20, 2016.