In the summer and autumn of 2015, Miyanoura Gallery 6 hosted an art project called "Artist at Gallery 6" inviting three socially engaged artists in residence to prepare installations for the following year:Yuki Iiyama, Yoshinori Niwa, and Mari Katayama. This year, in conjunction with the Setouchi Triennale 2016, the gallery is hosting "Artist at Gallery 6 2016," a series of works developed by the three artists, one for each of the spring, summer, and autumn seasons of the festival. The artists have made the most of the knowledge they acquired during their residencies in 2015 to create various works and events. 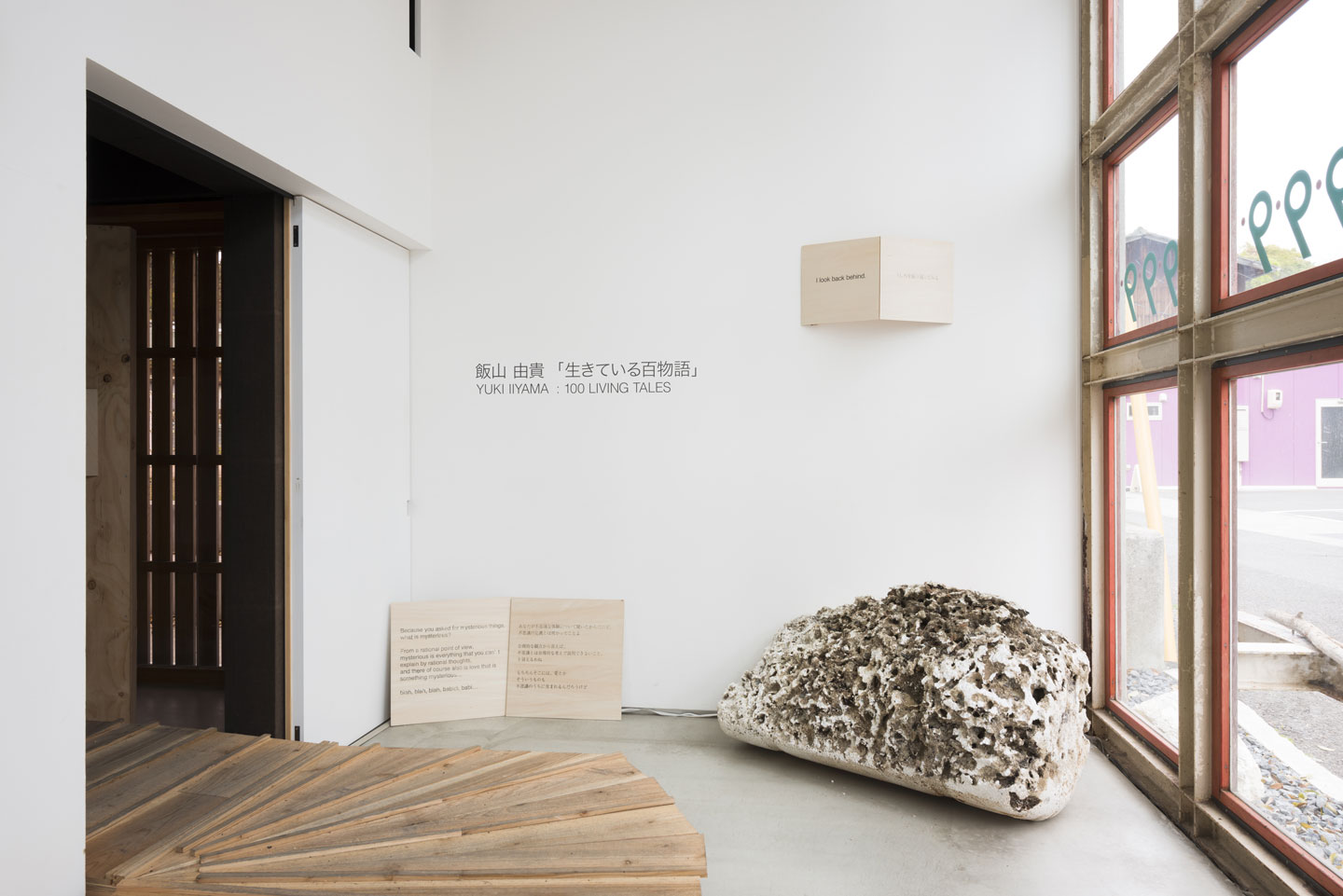 On entering, visitors were met by a model of a large rock and two messages written on plywood.

"I look back behind."
"Because you asked for mysterious things, what is mysterious? From a rational point of view, mysterious is everything that you can't explain by rational thoughts, and there of course also is love that is something mysterious... blah blah blah babidi, babi..."

From the entrance area, a winding wooden path slopes up, reminiscent of the corridor-like construction of Aizu Sazaedo, a temple in Fukushima prefecture. Along this space, Iiyama placed 66 mysterious stories that she had gathered from locals during her residency. In the center, were three screens onto which films were projected. On the center screen, was the story of a man taking care of 20 cats that were abandoned on a desert island. On the two other screens were voice-overs of two myths (one an indigenous folk tale of Japan, and the other a conversation about the myth of Sisyphus), while photos and scrapbooks of local sceneries were projected in the background.

Iiyama gets the concepts for her art from a wide variety of sources: for example, from old scrapbooks she has collected from internet auctions, or conversations with a family member who suffers from a psychiatric disorder, and from listening to people speaking about their own values, thoughts, experiences and actions. Delving into related social conditions and historical issues, Iyama researches, adds her own views, and attempts to portray her ideas multilaterally. Her installations aim to show the thread between someone's personal story and society as a whole.

Iiyama visited Naoshima for the first time in 2015, from August 27th to September 3rd.
She started her research about the folklore and history of Naoshima by visiting social welfare facilities. While searching for information on local folklore handed down through generations, as well as on the island's modern history, and current social welfare conditions, she shared her own collection of scrap books at Miyanoura Gallery 6, and visited local residents asking them if they had scrapbooks and albums that they would be willing to share. 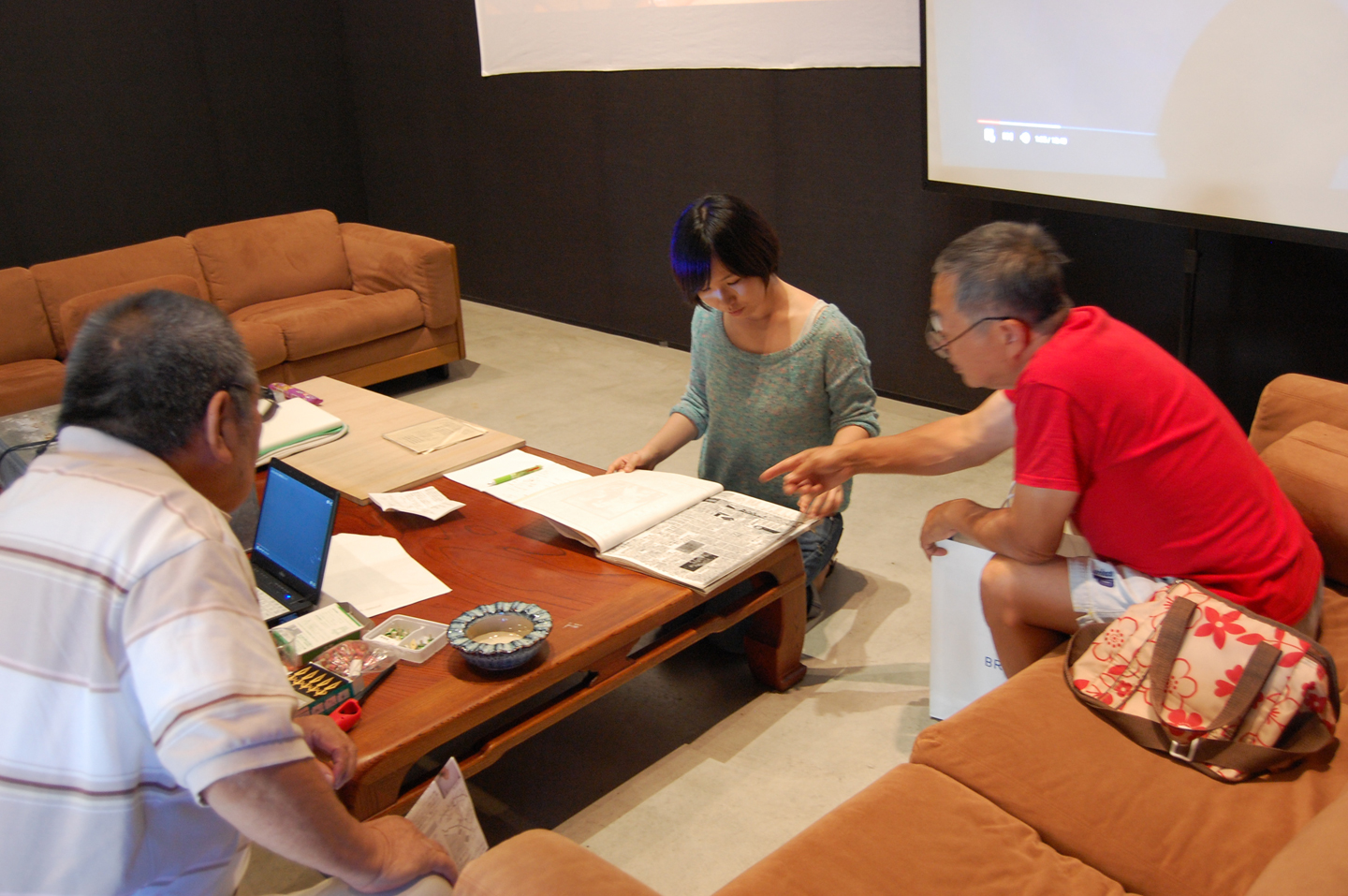 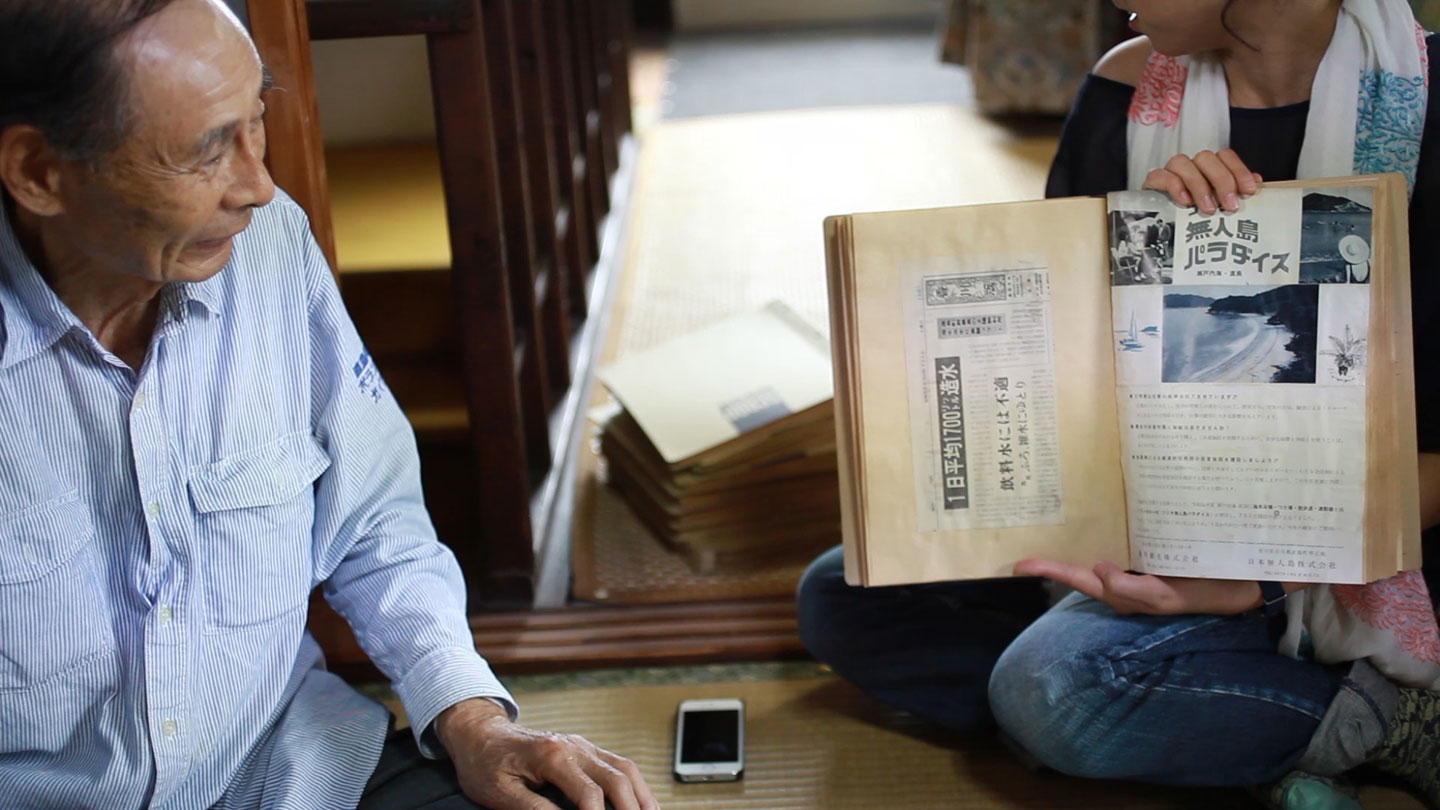 Two of the women that Iiyama met shared with her some "mysterious experiences" they'd had on the island. Inspired by their stories, she started asking the following question to everyone she encountered, "Have you ever experienced anything strange or unexplainable on the island?" In response to the intriguing question, people told stories of apparitions, ghosts, and strange sightings, along with their experiences of people's irrational and unreasonable behavior, and other stories that once were odd but have become less so these days, such as seeing boars swim from one island to another, and so on. These stories, combined with the scrap books she collected during her research, are what make up this installation of words and images.

At the "Artist Talk" at the end of the project on the last day of the exhibition, Iiyama talked about the processes involved in her work. A party was held after the talk, and the residents who had participated met with visitors and enjoyed sharing their impressions of the installation as well as their own "mysterious experiences," or stories that are usually kept secret. 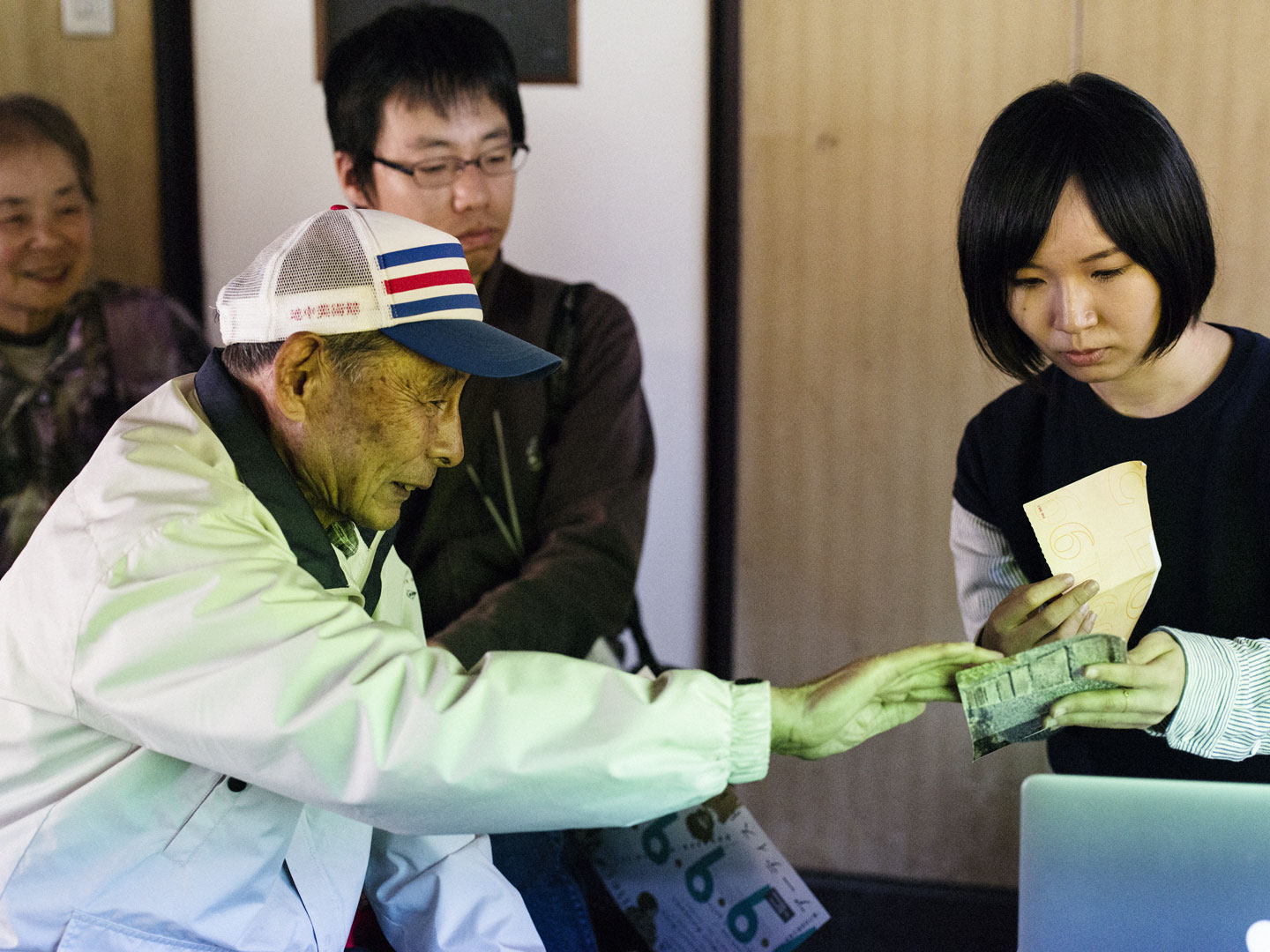 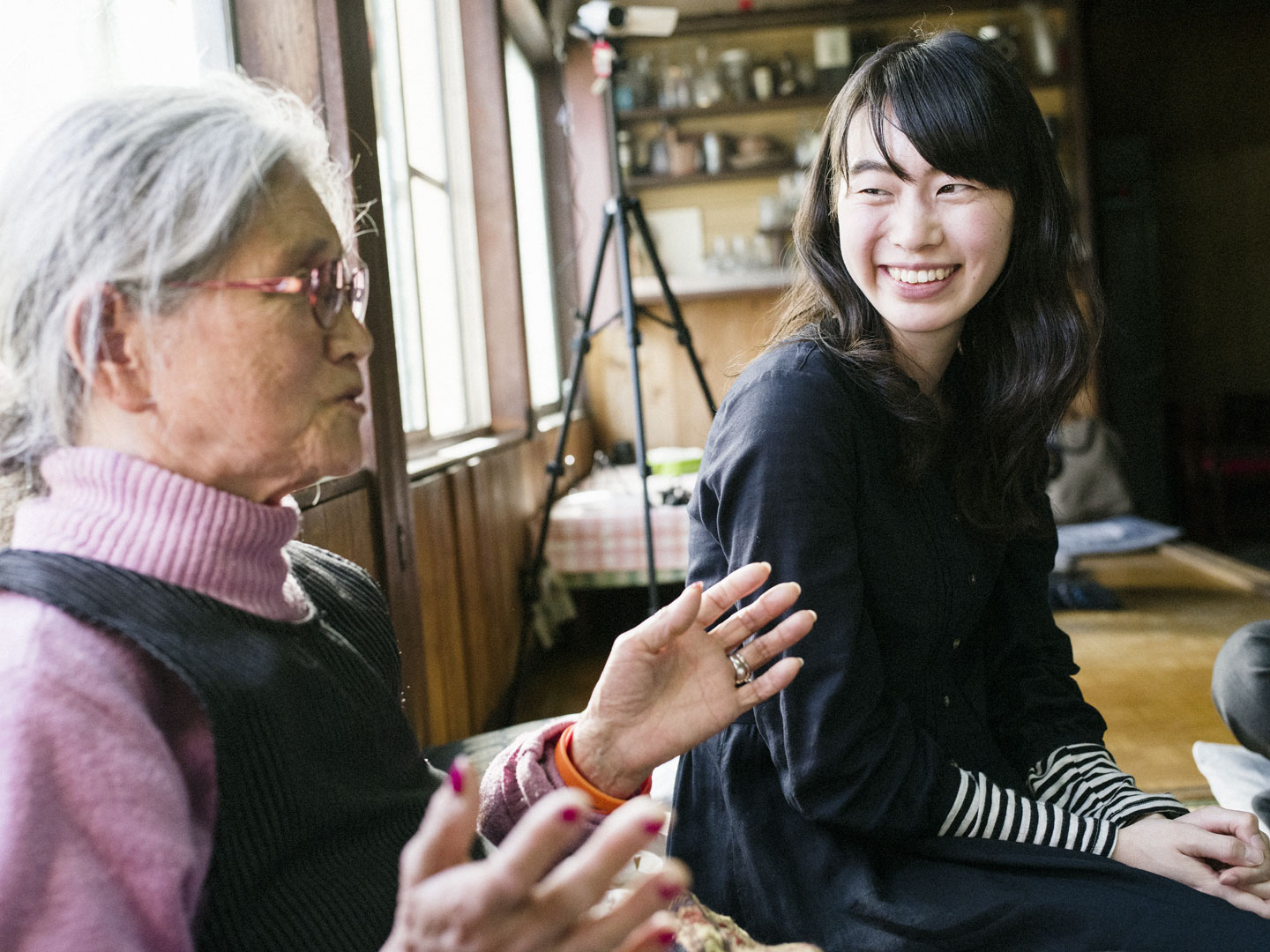 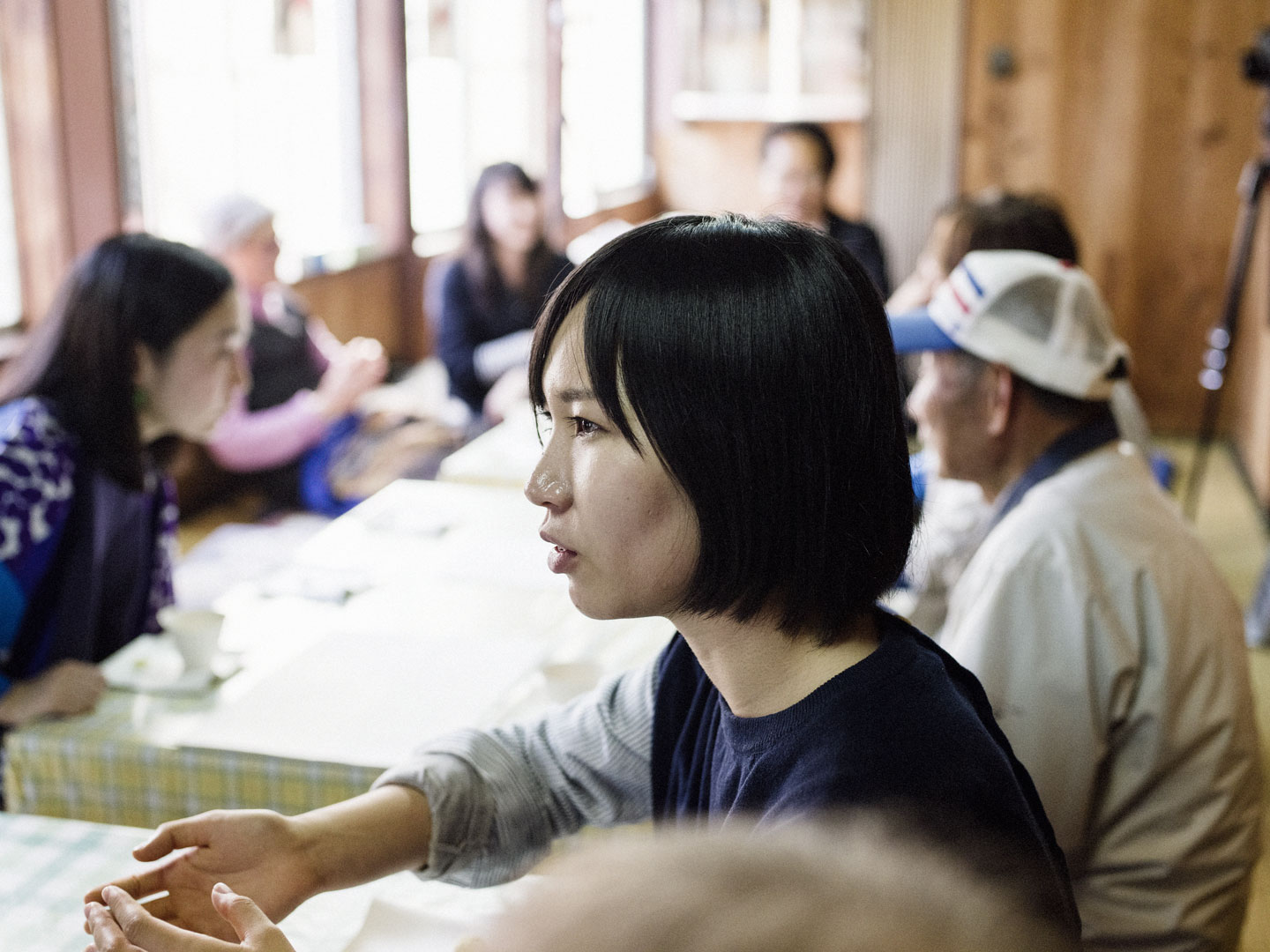 Voices that are usually not heard, trivial stories that people tend to ignore, odd thoughts that people hesitate to share because they don't want to be doubted by others -- Iiyama quietly and patiently listens to them, allowing the stories to be heard. While the island itself has become world-recognized as an "island of art" and has been receiving a tremendous amount of attention due to the Setouchi Triennale, the daily lives and stories of the island's residents, and the voices and tales shared by visitors to the island, all shown through Iiyama's vision, had always been here, lingering below the surface, unknown to outsiders.

People's various experiences and feelings which are often hidden, are not always beautiful but often surprising. Sometimes the prejudices and biases deeply seated in people's hearts are exposed. At the same time, though, when we happen to touch the deeper parts of people's hearts, we are made aware, perhaps painfully, of our own prejudices and biases, and may be given a chance to shift values we have held for a long time. This is what comes of "meeting people," and it is in this that Iiyama finds her motivation to create the art she makes.

At the "Artist Talk", a participant asked Iiyama, "I understand that "mysterious stories" and scrapbooks are parts of life, but why did you put these parts together to create your artwork?"

She answered, "100 people will not see the same thing. I do not expect the visitors to look at every single part of the project, but I hope each visitor will have his or her own experience from the many different parts of the exhibited items. It is my hope that some of those pieces will resonate with his or her values and experiences."

The "100 Living Tales" exhibition suggests that when we are given the chance to see something that's usually hidden, combined with scattered words and images, we may be moved to create our own tales. The very process itself might help us to make sense of the great hodgepodge of things that make up our world.

"Miyanoura Gallery 6" will be transformed succesively during the spring, summer and autumn seasons of the Setouchi Triennale 2016. The artists featured are different, but they all strive to reveal with their art something about Naoshima and its people that cannot usually be seen.

Yoshinori Niwa's work is exhibited during the summer season,; followed by Mari Katayama's work to be shown in autumn. Please come visit "Miyanoura Gallery 6" to see how each artist depicts the people of Naoshima.