In autumn last year, a momentous conference by Michael Govan, CEO and Wallis Annenberg Director of the Los Angeles County Museum of Art (LACMA), was held at Benesse Art Site Naoshima. A critically acclaimed specialist of the oeuvres of both Walter De Maria and James Turrell, two artists whose works are of central importance at Benesse Art Site Naoshima, we would like to share some of the words and insights presented in Mr. Govan's conference, Geometry, Light, and the Sublime. 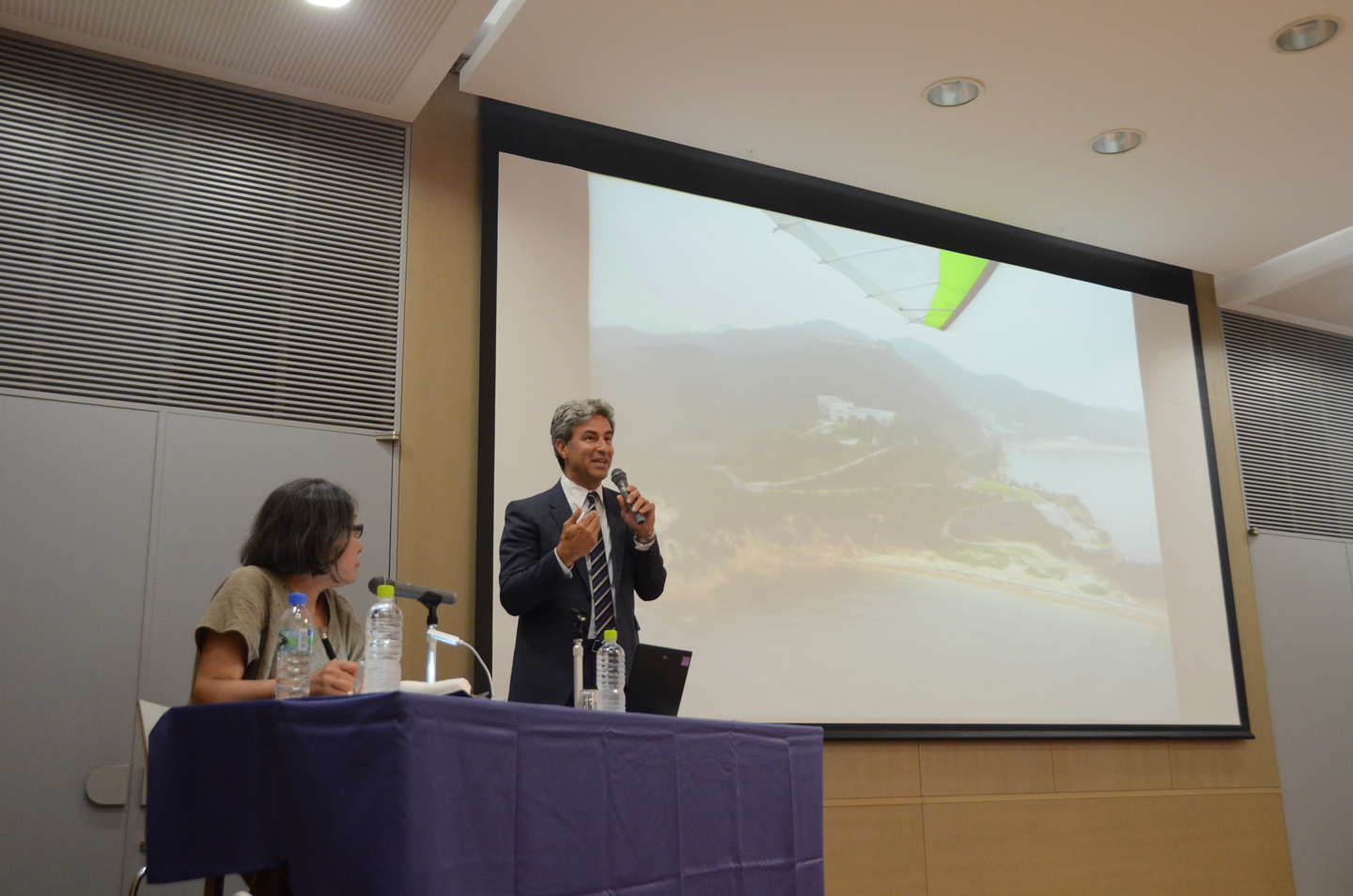 Michael Govan：
"Today, I want to talk about geometry and light in the works of two artists, Walter De Maria and James Turrell, in part, because I think that we often equate geometry with minimalism and with something that is cold or distant or scientific and not of the realm of art and of the emotional. I want to ask that question today about geometry and how these artists look at geometry in a very different way.

Geometry of course is in the realm of the universal, it doesn't only belong to Eastern culture or Western culture, it belongs to all of us and there are deep roots for this interest in geometry. A simple example might be the Edo period Zen painting by Sengai The Universe, a circle, a square and a triangle - which makes itself very clear.

With James Turrell, we introduce light into geometry. In his early days, Turrell's artworks were projected in light, and gradually became light framed. Afrum Pale Blue, 1968 is of the former variant, and Open Field, 2000 of the latter, both at Chichu Art Museum."

"When James Turrell talks about Afrum Pale Blue, he repeatedly referred to Greek philosophy, to Plato's cave. And the idea of Plato's cave, if you don't remember your Western philosophy, is that the world we see is the projection of something behind and outside; that we are just seeing the projections of more ideal forms that are up there somewhere else. It is a very strong statement about what we see in front of us, and that there is a reality beyond. So, Turrell was interested in the idea that he could make light, something immaterial, feel material and these two works at Chichu Art Museum are examples of that idea.

Then Turrell had an important idea. He started with projections and then framed light, and then he realized that he could introduce nature as the source of light. That he could frame the light from the sky and make it physical. Open Sky, 2004 at Chichu Art Museum was one of the first large Skyspaces that incorporated changing color light. And if you have experienced this, you know that James Turrell, with this changing color light, can change the color of the sky. When you have a purple in the space, the sky actually appears quite green, not the blue that we know.

In order to reach the deepest emotions associated with perception, Turrell takes the light blue almost to blackness, to the dark, to the light again in his piece called Backside of the Moon, a collaboration with Tadao Ando here in Naoshima. The idea of Backside of the Moon, is to reveal something we do not see. It is again an idea of something unseen, internal, and inaccessible. This image really appears out of blackness and it seems to appear out of one's own mind. You do really feel this, which is something that I think approaches the idea of the word sublime." 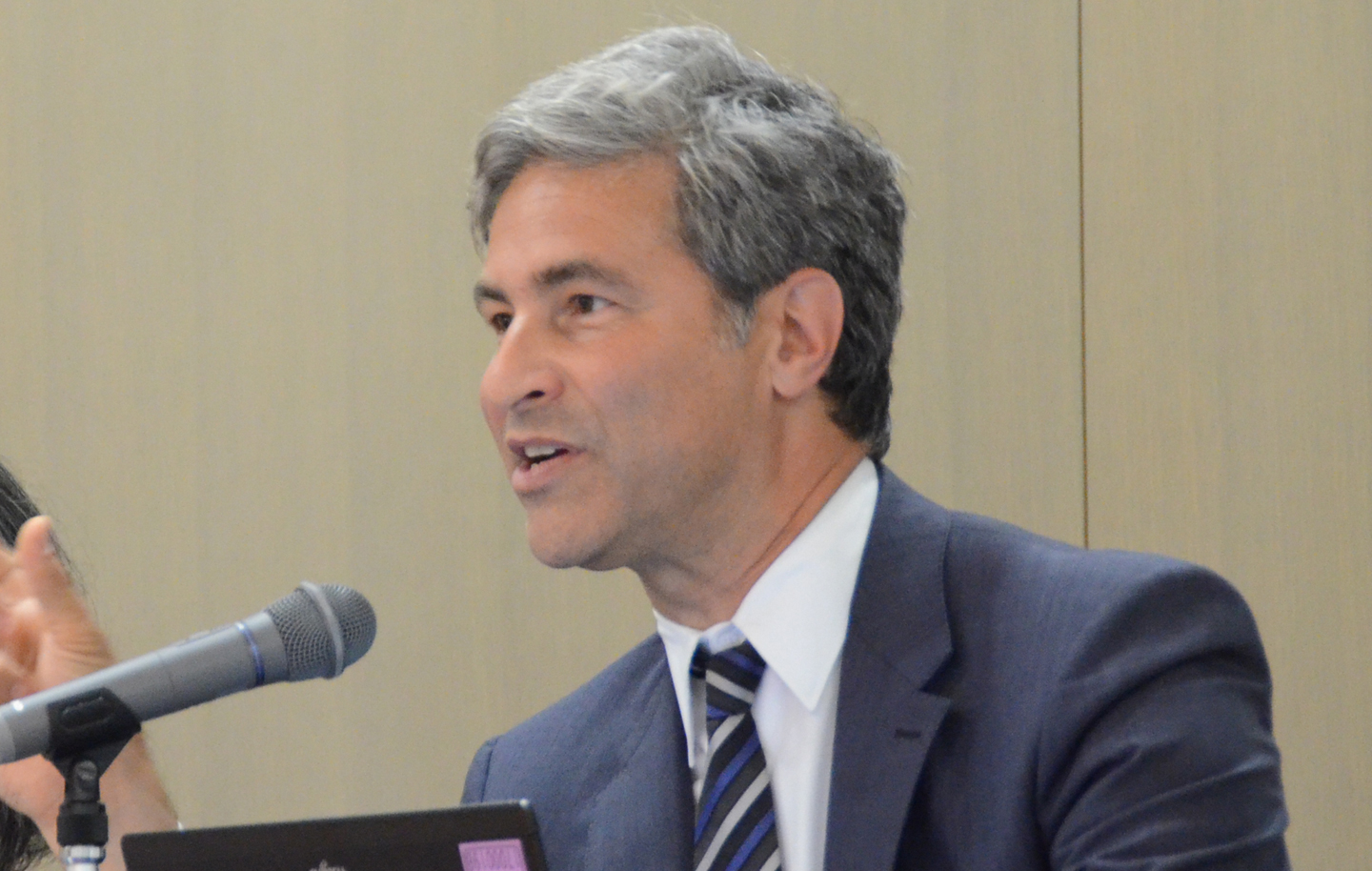 Michael Govan then described how the word "sublime" both has a literary and artistic tradition and how it cannot be spoken about without thinking about the landscape.

"It also has something to do with the vastness and the emptiness of space sometimes found in a landscape, which can be so great that it is hard to grasp. Walter De Maria's artworks draw geometry or lines into a landscape to create a sense of measurement almost as if to propose this problem of measure and the immeasurability of the scale of the landscape. In I Ching, 1981, exhibited at Dia:Beacon, the word "sublime" represents change, possibility, permutation, and again strict geometry but the artist's interest lies in its changeability, not its fixity.

In Walter De Maria's Seen/Unseen Known/Unknown from 2000 here on Naoshima, the work is comprised of two spheres of granite and bars in gold. This is very fixed, the granite doesn't move out. The view is ever changing. When you stand between the two pieces of granite, you don't see the other geometries in gold at all. As your body moves, you see different things and part of the installation is blocked from view, unknown, unseen, it is your movement that creates this changing relationship to this fixed geometry. Walter De Maria famously hated interpretation. He would always correct me if I tried to attribute any image or meaning to anything that he made, but I will say that I cannot avoid seeing these two spheres with their reflections of the outside as the artwork seeing out as well as us seeing into the artwork.

And here is the work Time/Timeless/No Time from 2004. Add to that Ando's architecture, where thin slivers of light make it such that the gallery is always changing like a sundial. No matter when you are there, if you go in 5 minutes later, it is different. We have these items which are fixed, these geometries which are solid, but of course through light reflection and the idea of permutation, there is a great, an incredible deal of variability."

"This work highlights ourselves facing something beyond, something unknowable, something ungraspable, in the nature of romantic tradition, of feeling ourselves perceiving. This takes us from geometry to something that's very much about intuition. You could even say it is close to Claude Monet and his deep impressions of the experience of the field of light in the landscape."

To conclude his lecture, Michael Govan introduced the following poem.

I meet, I find the Beautiful - but I give, contribute, or rather attribute the Sublime. ―Samuel Taylor Coleridge

"Something can be beautiful by itself, but it becomes sublime when the eye considers its eternity. You will contribute to the experience by seeing the work again and again."

Chichu Art Museum permanently houses works that display an infinite range of possible expressions. The official catalogue of Chichu Art Museum including an essay by Michael Govan is scheduled to be published this spring. Please look forward to it.

Michael Govan joined the Los Angeles County Museum of Art (LACMA) as Chief Executive Officer and Wallis Annenberg Director in 2006. In this role, he oversees all activities of the museum, from art programming to the expansion and upgrade of the museum's twenty-acre campus. During his tenure, LACMA has acquired by donation or purchase more than 27,000 works for the permanent collection, gallery space and programs have almost doubled, and annual attendance has grown from 600,000 to nearly 1.6 million in 2016. Currently the museum in the process of building a new, state of the art gallery building designed by architect Peter Zumthor.